This delightful exhibition is a collaboration between Second Life designers and photographers, celebrating the art of the hat. Both hats and images are for sale, and an auction will benefit the “Feed a Smile” charity. There will be a fashion show on June 21.

I was thrilled to be invited to show some of my recent headpieces in the Exhibition and to be teamed with brilliant photographer Sina Souza, whose moody atmospheric image are simply amazing. I can’t show them here; you’ll have to go and see them! 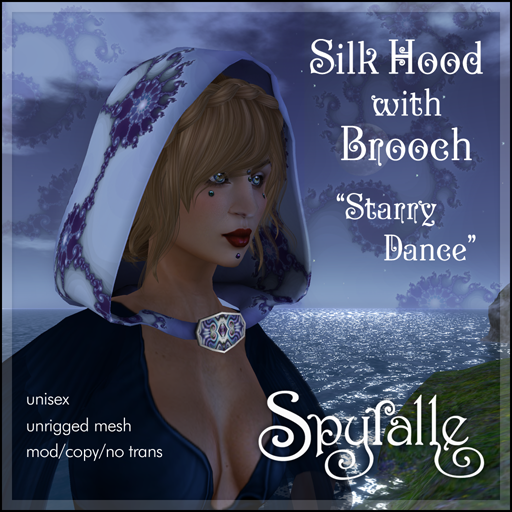 The first hood in the series is “Dyers Guild,” created for the Silk Road Hunt, continuing through June 30.  This is at Spyralle only, free to hunters.

The hood and brooch are original mesh, textured with original fractal images. They are unrigged and can be resized and repositioned.

The third in the series is “Oasis Path” – one of the gifts in the Passport game at Fashion for Life. The fourth hood, “The Parchment Scroll,” will be a free gift at Spyralle later this month and will be announced in world.

Also shown at Art in Hats, Spyralle’s Waverider Pacific crown, released at Fantasy Faire 2014 and the Cage Collar – Cryo, which made a brief debut at World Goth Fair. I will show the collars in a future post.