The year keeps turning, and the owls fly every night, under the moon. Last year we brought you the Owl Moons of September through December, plus some special gowns just for the holidays. Now we bring you out of winter into spring with January through April. 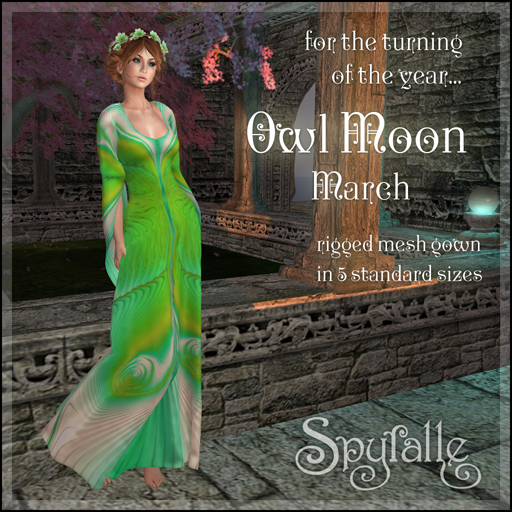 I must have made about a hundred new colorings of the fractal for this group, of which I saved maybe a quarter as parameter sets and rendered about ten. Recoloring means fine tuning several layers of gradient in Ultra Fractal, rendering out an image, then starting the texturing of the garment over from scratch, sometimes more than once. March took three complete makeovers before I was satisfied. February needed only two.

Texturing with these fractals is not a matter of “slapping them on” or just using them as they come, right over the mesh UV or the avatar UV. There are many hours of experimentation, meticulous seam matching through scaling, rotation and other transforms and 3D testing before the design of the prototype is final. I’ve learned to document every detail and create template files as I go, because it’s almost impossible to reconstruct some of these processes after the fact to make a more colors. 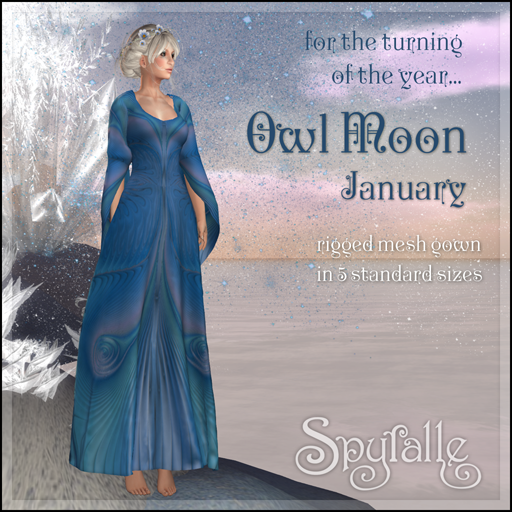 It all paid off with January. She came together on the first try! By then, it was March. But winter will come again, and blue is always in season.

Spyralle Studio group members received January and February as gifts. All four gowns are in the store now. And the year of Owl Moon is not over. There are four more in the, ah, wings. And Fantasy Faire is coming!

Photographed at Ode, Annon, Athan and Aear. Poses from NanTra, Marukin and Di’s Opera. The skin is Sia from Glam Affair, Asia tone, and the hair is Ange from D!va in various colors.  Feet by Slink, eyes by IKON.