Time Moves Differently in the Other Realm

Yes, it has been a long time. One finds oneself threading the rapids in a fragile canoe, and there is no time to sit back and talk about it. All the energy must go into avoiding the rocks and the whirlpools and staying upright and not getting swamped.

I didn’t get swamped. But I didn’t have the leisure to talk about it either.  About a week ago, I was able to haul the canoe out of the water and lie panting on a sandstone slab under bare willow trees, build a fire, warm up and try to dry out my gear. So, now I can talk, if this creaky voice can be made to work again. And, while I was surviving, it seems that years passed in this world of pixel magic.  And I wonder if anyone still understands the Old Tongue. 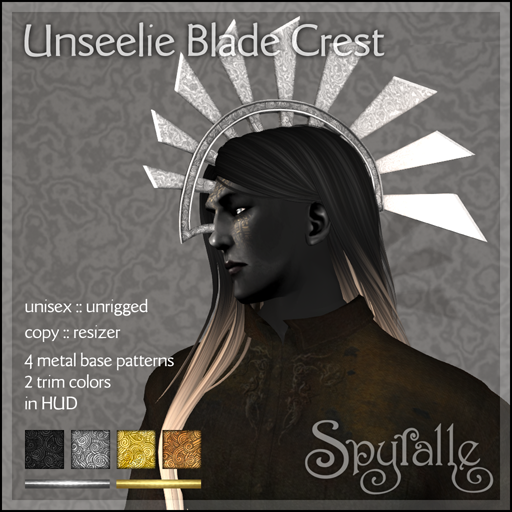 Once upon a time, many eons ago as pixel lives reckon it, a talented woman (perhaps she has the Sight; I do not know) wrote a marvelous book about two worlds existing side by side in space and time, linked and yet alien from each other. One world we would recognize. In the other, there was perpetual war between the Seelie and Unseelie courts, and one human woman was drawn from the first to fight in the second – with a most unusual kind of magic.

The book is War for the Oaks, by Emma Bull, and I recommend it highly.  If you look closely, you may, with a smile and a tear, see a thread of Purple running through it…

War for the Oaks was my inspiration for two new headpieces created for Totally Top Shelf, now open. The Seelie and Unseelie Fae of the book are fierce, merciless and dangerous, as most Fae of popular literature tend to be these days.  But Emma was not part of a “trend”. She founded it, as much as anyone did.

These almost-human characters wear metal crests actually implanted in their skulls – they go piercings one better – because they have power over their own flesh and can add and remove such embellishments at will, without harm to themselves.  Sounds like another World I know, and you know…

Be wary. Be watchful. They may be among us now.