Inspired by the imagery of Mary Shelley’s Frankenstein, Justine is named after one of the book’s tragic characters. Justine appears in 5 goth-appropriate colors, though you may want to seek out the special edition now in case it does not carry over to Spyralle after the event. Events for Parkinson’s Halloween event “Gotham Island” is where you will find Justine until the end of October. Proceeds go to Team Fox for Parkinson’s research. Halloween is everywhere on the Grid this month, but Gotham Island is an event you should not overlook, including their 10L hunt, also benefiting Team Fox. Here is Spyralle’s hunt prize: 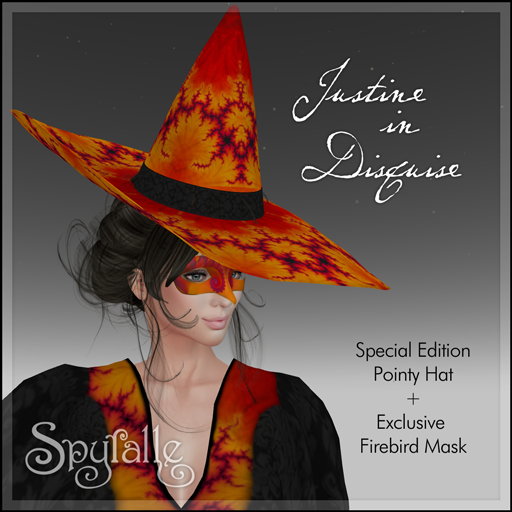 … showing that Justine has her whimsical side as well. The gleam in her eye may indicate that all the gloom and drama is only role play, and we’ll all come in out of the fog for a mug of hot spiced cider in front of the warm fire …

Justine wears the Lara body by Maitreya and the Greer bento head by Lelutka, with a personal shape. The skin is Emilia in Tone 1 from YS&YS, and the eyes are IKON. D!va’s beautiful and elegant Ange is the hair. Poses come from MUA and Di’s Opera.