Soft sands and warm breezes speak of a age long ago when ancients, no longer tethered to time and place, departed Sanoria in search of others of their kind. Ruins, seemingly deserted, still hold echoes of their essence and when the Southern winds call pilgrims come. They know not why — only that there is magic in the land that calls to them and they cannot resist.

The world of Sanoria has manifested for a brief and fleeting time in the realm of Fantasy Faire 2018 in the universe of Second Life. Fantasy Faire is an enormous and amazing event undertaken every year to raise funds for the American Cancer Society through Relay for Life. Hundreds of designers, story tellers, role players and other participants from all over the world join together to make the magic happen.  If you want to see Second Life at its most imaginative best, Fantasy Faire is the one place you should visit. But be timely – it lasts for only ten days in April. This year’s fair opened 19 April and remains open through the 29th.

One of four magical images appearing on the Nightfall Timepiece

Spyralle has joined with friends to sponsor Sanoria and make a home there as long as the Faire lasts. Sanoria at the Faire is manifested out of memory by designer Chic Aeon. Inspired by the story of Sanoria and by worlds we have seen in past Ages, Spyralle’s designer Kerryth Tarantal has created two architectural fantasies, exclusive to the Faire until it returns to the Mists.

The first structure is the Ageless Timepiece, a mechanical wonder telling time by some system lost in the distant past.  ‘Nightfall’ – a timepiece in dark blue and creamy beige marble, amethyst, glass and various metals – is a unique edition of the Timepiece donated to the Faire silent auction. You can place at bid on silent auction items at the Story Well realm of the Faire. 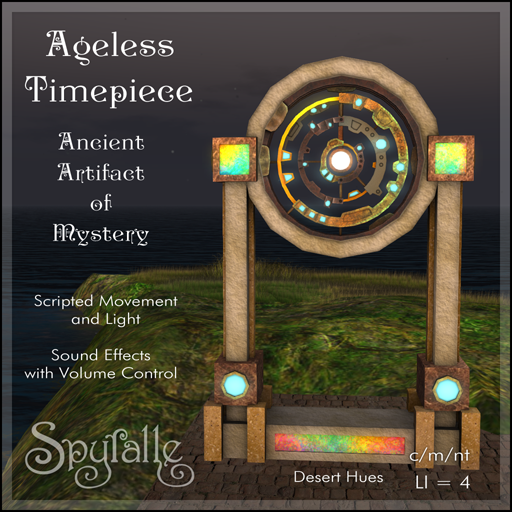 The ‘Desert’ edition of the Timepiece is one of Spyralle’s RFL donated creations available to everyone in the shop at Sanoria (which we share with Dragon Magick Wares, Tai’Dyed and Sandhands Texture Lab). There is a full size working model – be sure to stay long enough to watch the intricate mechanism turn, to hear the bell and see one of the magic images appear.  One hundred percent of sale proceeds go to Relay for Life.

‘Dawn’ is the third color of Spyralle’s Ageless Timepiece, available at Fantasy Faire on 27 April. Two other colors are in preparation. We hope they will be revealed before the close of the Faire.