Haze Pottery shines again in this set created for the spring’s Twisted Hunt. Morningstar glaze showcases the gentle colors of spring. For the most fun and a little help, join the Twisted Hunt group in Second Life, but be sure to read the rules.

Dearest of all grid hunts, the Steam Hunt XV gives Spyralle an opportunity to create this tribute to our good friend Tailahr Winnikow. The gadget serves no purpose but whimsy and features Tai’s favorite color. We hope it would have made her smile! Begin your Steam Hunt at Mieville’s colorful Steam Expo. Visist Spyralle’s Expo shop while you’re there.

For information on all three hunts, visit Spyralle and click on the hunt signs. There is a special landing for the Twisted Hunt, near the giant dancing winged bicycle robot. The Twisted prize is within 30 meters of the Twisted landing.

The Great Exhibition in New Babbage will end its magnificent run next week. April First is the last day to visit the Crystal Palace and all the fabulous exhibits. This is a showcase of art and engineering in Second Life that you truly must not miss!

Spyralle has recreated the famous public clock of the doomed village of Duskhallow  expressly for the Exhibition.  Although intrepid explorers are able to bring remnants of Duskhallow into the outer world from time to time, if is likely the woeful story of the town’s fate will never be fully known… 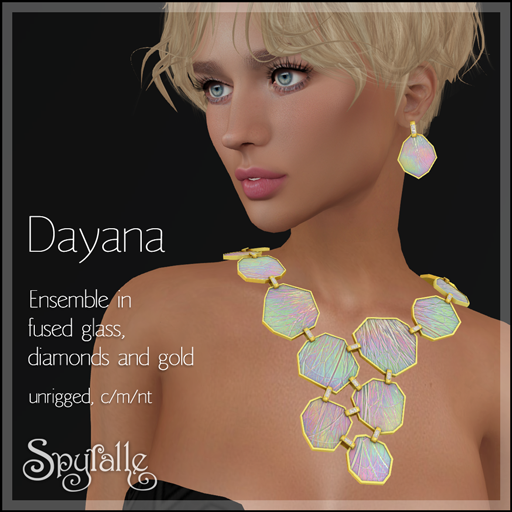 Assembled from rough-hewn shapes of fused glass set in gold and connected by diamond embellished gold links, Dayana is jewelry everyone will notice.

Dayana is available two days only for half price at Spyralle. This exclusive release is part of the Redeux Express event for March 7-8.

The Wraith of Bristow’s Folly

Bristow’s Folly is the second Spyralle creation inspired by the work of 20th Century British illustrator Rowland Emett.  A folly, according to the Encyclopedia Britannica, is defined as “in architecture, a costly, generally nonfunctional building that was erected to enhance a natural landscape.” Emett’s sad portrait of Mrs. Bristow’s Folly in his 1953 collection of Punch cartoons, Emett’s Domain, shows a once pretentious ornamental garden tower reduced to serving as a derelict, somewhat haunted water tower for his imaginary Far Tottering and Oyster Creek Railway. Unfortunately, I have not found a reproduction of this particular drawing online.

Spyralle’s take on the Folly – which combines architectural notions from other parts of the same drawing – is not as decrepit as the original, but it is even more non-functional as architecture because it is wearable! Combined with the Wraith, a rigged flowing pair of wisps of mist or smoke, this outfit won in the Architecture category of the first annual Wearable Art competition at the Home & Garden Expo in Second Life, a benefit for Relay for Life. The Expo continues through Tuesday, March 3.

The costume comes in two parts can be purchased separately at Spyralle’s Expo location. All proceeds benefit Relay for Life for the American Cancer Society.

The first part, the Folly, is a wearable miniature building. The gazebo tower part attaches to the chest and is unrigged. The cupola and roof, also unrigged, attach to the nose. The wearer has the option of hiding the body or body and head. Alpha mask layers are provided. A separate lantern may be added to the cupola if the head is hidden. 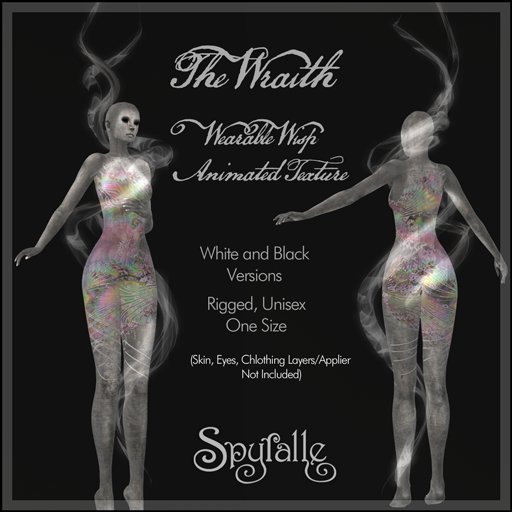 The Wraith is a set of rigged attachments in one size with an animated wispy smoke texture which can be worn with the Folly or any other outfit. A white version, shown here, and a black version are included in the package. Demos are available.

A word of caution! Although the Folly is modifiable, enlarging it to building scale is NOT recommended. The mesh is not optimized for a full size building, and the land impact will increase drastically as the size increases. Also, the model has no physics and is not walkable.

The Wraith is shown on a Maitreya body and LAQ bento head with a Lacrimosa skin  from Fallen Gods, eyes by IKON and a Thornweaver bodysuit from Spyralle. 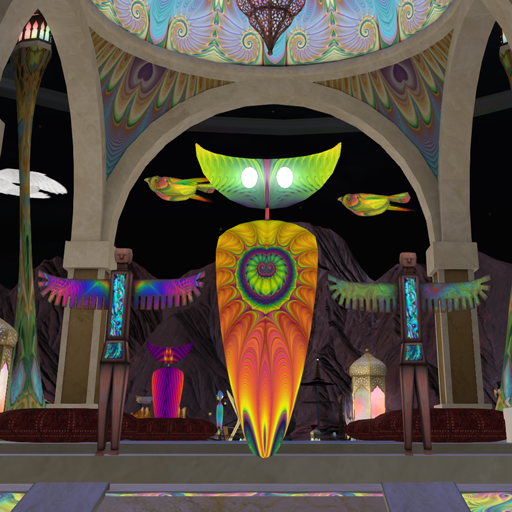 They came in a dream, years ago. I do not remember how long ago. Figures of painted wood, standing silently. They were benevolent, not frightening. Their messages were slow, calm and silent. Finally, a long time later, I began to try to recreate them. Here is an early version, welcoming visitors to my Burn2 camp in 2017, “Processions.”

Now the Spirit Messengers are ready to be watchful in your garden or your home. There are sixteen of them in a new exclusive gacha at the Home and Garden Expo, an annual benefit event for the American Cancer Society.

These are the first and oldest Spyralle totem figures. They remind me of cats, just a little – maybe the goddess Bast.

Spyralle has a major new release in the wearable art competition at the Expo. I will cover it in a future post, but you can see a display here.

The current round of Enchantment is inspired by The Princess Bride, that storybook story of True Love and miracles, loved by so many.  I have read the book, but it’s movie I am especially fond of – one of my all time favorites. I have no idea how many times I’ve seen it. It was so hard to choose one idea for the event.

So here is a little detail from one of my favorite scenes! The wine goblets seen in the “battle of wits” scene do not look quite like this – and believe me, I have studied them! I have added a fractal enamel bowl and given them colors!

You have your choice of two sets, 100L each at the event, a special introductory price.

The Enchantment Hunt is on in individual stores. Here is what you may find at Spyralle!

Ah, if only True Love could be bottled! But miracles can come from anywhere…

Spyralle Eagle of the Forest Headpiece

The original plan, like many of my plans, turned out to be vastly over-ambitious.  There would be a series of ceremonial accessories, accoutrements of wisdom and power, worn by the sibyls and shamans, the guardians and wanderers, in that pan-Arctic, trans-Pacific world outside of time, in my dreams. But I live in Time, so I’ve only been able to produce glimpses, like half-buried memories, curiosities brought back by fortunate Victorian explorers who stumbled across the boundaries for a while and returned with tales no one believed. And lovely, strange souvenirs wrapped carefully in tissue paper and hidden in old trunks.

So I unearth them piecemeal, usually one at a time.

And not always in season. The Eagle of the Forest emerged from someone’s grandmother’s attic like the memory of green summer in places where summer is brief, intense and glorious. Here, by the fire, in winter darkness with a blizzard bearing down, I turn my find this way and that in the lamplight, admiring the sheen of colors, the glow of the gems, the fierceness of the eagle’s eyes.  A familiar longing arises in my explorer’s heart.

You can find your own Eagle of the Forest at this month’s Midwinter Fair event, opening January 18.

There was an Eagle of the Snows. Now there is another. Could there be more in other forgotten trunks in other attics?  On walls of back rooms in distant outposts?  In carved chests kept in places of honor by those who still Remember? Time will tell.

Spyralle’s original unisex Eagle headpiece is embellished with our trademark fractal art and worn with a Fallen Gods shape (modified) and skin, IKON eyes and Spyralle’s Shaman of the Forest robe (exclusive group gift from November, 2019). The Eagle of the Snows awaits your discovery at Spyralle’s headquarters, at the top of the south stairs. The released Shaman robes are on the Annex level.